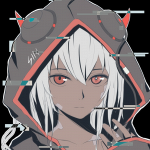 19/03/20: currently on indefinite hiatus due to several circumstances. will be back soon.

hello! my name is altos, or blake. i use any pronouns, and don't care what my gender is perceived as, though i refer to myself as male. i'm a 15 year old highschool student living in croatia (english isn't my first language, though i speak 7) and have a particular affinity for writing and drawing original characters + playing video games. cytus II was introduced to me by my girlfriend, and i began playing it on 08/10/19. it's certainly not the first rhythm game i've played, but, until then, i had abandoned all the previous ones i'd been playing, so it was a change of pace, especially since it's not styled like the ones i used to play (love live, idolm@ster games, bang dream, etc). i've gotten pretty good now, being able to easily MM hard songs (except ramen is god, curse you, ice and aoki) and fullcombo most chaos charts despite playing on my phone and being a thumbs-only player.

regarding the wikia, i used to be a contributor for os log pictures only, but seeing as the community was pretty lacking in some parts, i decided to join for real. i mostly just edit when i have free time or am bored, 'cause i've got nothing better to do.

i guess that would be it. thanks for reading! <3

↳ you can also find me over on the your turn to die wiki.

↳ add gallery options to songs, fix bpm, lyrics and the like

Retrieved from "https://cytus.fandom.com/wiki/User:ChaosAEsir?oldid=120373"
Community content is available under CC-BY-SA unless otherwise noted.