Her eyes are shackled by the chains of knowledge.

Nora is a main character in Cytus II, and is one of the 24 playable characters. She was released with the 1.8 update. Currently, Nora has 11 songs, and maxes out at Lv. 27.

A mysterious girl with a genius mind who is the creator of ROBO_Head. By reading ROBO_Head's archived record files, the stage is moved to Node 03 on the other side of the world. This Node is controlled by multiple gangs and chaos is always present. Under the turbulent and constant power struggles, the mysterious girl "Nora" observes everything quietly from her secret chamber located deep within the scientific organization "Kyuu Hou Kai".

Immune to the Ender virus, she possesses the "Eye of Horus" ability, which allows her to enter the OS space and search for hidden files and records. After growing up, she became the Chief of the Kyuu Hou Kai, establishing herself in the gang world of Node 03.

Unbeknownst to her, she is about to witness a fraction of the truth behind Node 08's ongoing mystery, from her small room in the far, far East.

Nora is a girl far too mature for her age, having accomplished many things despite being only 12 years old, like being the leader of Kyuu Hou Kai, an entire organization. She possesses a special power called the "Ability," or "The Eye of Horus," which allows her to see certain things others cannot, but has caused the condition and health of her eyes to worsen. She is also unable to walk due to her legs having been amputated at a young age.

She's cool, calm and collected, even somewhat stoic and aloof, showing little to no compassion or genuine emotion towards anybody, and feels no guilt reprimanding or scolding people older than her, no matter how much. She always only focuses on the tasks she has at hand, causing her to overwork herself sometimes, though she doesn't ever show it nor ask for help.

However, a flaw Nora has is that she believes she can shoulder things alone by blocking out emotions, but still has moments of weakness sometimes, specifically near ROBO_Head, whom she created. He serves as a true friend, and always looks out for her, even if she doesn't want him to, so she is incredibly thankful to him. 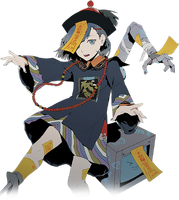