Kizuna AI is a collaboration character in Cytus II and is one of the 17 playable characters. She was released with the 3.1.6 update. Currently, Kizuna AI has 10 songs, and maxes out at Lv. 15.

The brilliant idol Kizuna AI has been a world-famous superstar for a long time. Fans love her charming singing, dancing, and live performances, whose motivation is simply to "make everyone happy". This is a story of how she accidentally stumbled into a meaningful friendship.

A little girl from Node 3 goes missing in the forest, worrying her family who go out to look for her. That girl (a young Neko Asakura) falls over in some facility and wakes up greeted by Kizuna AI, coming form a watch projection. Both the little girl and Kizuna realise that they are lost, and resolve to go home. The little girl decides to call Kizuna Ai onee-chan, and refuses to tell Kizuna her name, since her mother told her that she shouldn't give her name to strangers. Kizuna is sure that once she connects to her team they can guide her out of the forest and to her home. Eventually, the two arrive in Node 3, where Kizuna is confused by the lack of technology. Seeing carbon emitting non-flying cars she concludes that she must have time travelled, confirmed by the little girl saying that the year is 687 when Kizuna thinks that she's from 2020. From this she concludes that they need a time machine. A guy they pass by mentions that he knows of this time machine in a nearby town on the sea (implied to be Lam Kong from VOEZ) in the basement of some cafe. The two travel to the town via the MRT and enter a random cafe. There they talk to the girl working there (Chelsea), and gain permission to enter the basement, where they use the time machine.

They find themselves in Kizuna's time, with flying cars and tall skyscrapers, which confuses the little girl. Kizuna has returned to a proper body instead of just being a projection. The two a directed go to her Kizuna's team for aid as they ask how to get the little girl back home. They meet up with Kurosaki, one of Kizuna's team, and ask where the little girl comes from, who replies that she comes from downtown Node 3. Kizuna and Kurosaki are confused, since it doesn't exist in the records, and Kurosaki recommends they hand her to the police who can handle the situation. They become more confused over the girl's insistence that the year is 687, which creates a conflict since cars definitely weren't a thing in 687. Kizuna and Kurosaki decide that only ExtenLifeCorp might know anything about the situation, and decide to visit. The little girl runs ahead of Kizuna, telling an armed guard drone to run away, and the drone obliges. The little girl sees what she thinks is her mother and runs in, whilst Kizuna sees Vanessa (from Cytus I), and chases after the little girl to tell her to that it's not her mother. The scientists at ExtenLife Corp try to shoo the girl away, rebutting her claims that Vanessa's her mother. Kizuna starts malfunctioning, with memories coming back to her. She receives a supposed message from Vanessa telling her that the world of slumber is going to collapse. This puzzles Kizuna, who eventually finds the little girl after ExtenLifeCorp throw them out. The little girl then finds a way back to downtown Node 3 and runs away again.

Kizuna starts remembering what happened, the Ender virus and the extinction of humanity, and concludes that this is a virtual internet induced dream that the girl is having. Meanwhile the little girl manages to make her way to her supposed home and is berated by her parents for going missing and causing trouble. To add to the confusion another version of her is already present. Kizuna catches up, and sees the little girl as the room and her parents start melting and chasing her. Kizuna runs away with the girl and she explains what the situation is; that she's dreaming and she needs to take control of the dream. Additionally, since the virtual internet is involved, the situation could be lethal. The way for the little girl to take control is to take courage and tell her supposed parents to go away. At first she refuses, but Kizuna manages to convince her that they're not real, and she tells them to go away. The world starts disappearing.

As the world disappears, the little girl asks what will happen to Kizuna as the little girl starts floating. Kizuna replies that she can't leave, and that the little girl won't remember the dream. She then talks about the people they met, and how they are memories of real people. Kizuna ends saying that she treasures both the time before the Ender virus and her time spent with the little girl in the dream. As the dream ends Kizuna finally asks again what the little girl's name is. The girl replies Neko Asakura, to which Kizuna comments that it's a funny name. She then tells Neko to be a good kid when she wakes up.

Neko wakes up (remembering nothing), and is found by her parents who take her home. Later, when the family move out from downtown Node 3 into the city, they pass by the forest. Neko cries, without knowing why. Kouhei comments that it's probably due to the dangers of downtown Node 3 and says that moving into the city will make them a lot safer. 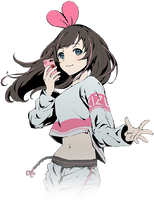