Joe is a main character in Cytus II, and is one of the 16 playable characters. He was released during the 1.4 update. Currently, Joe has 11 songs, and maxes out at Lv.36.

JOEZ Cafe of Node 08——On the surface it comes across as an ordinary pub, yet is in possession of over half the city's underground intel.
What transpired in the past to push cynical JOE over the edge, leading to undeniable association with notorious gangs and involvement of cross Node criminal activity past the point of no return? Malicious intentions lurking within the metropolis' dark corners are just waiting for the right moment to bring themselves to the light.

More can be found out about Joe in his OS Logs. 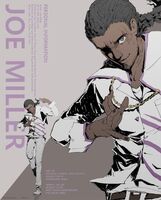 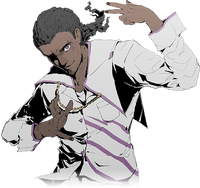 Vivid
Add a photo to this gallery
Retrieved from "https://cytus.fandom.com/wiki/Joe?oldid=120794"
Community content is available under CC-BY-SA unless otherwise noted.