Can you hear me?

Ivy is a main character in Cytus II, and is one of the 24 playable characters in the game. She debuted with the 2.0 update. Currently, Ivy has 44 songs, and maxes out at Lv.80.

On the eve of N.A. 700, people are cheering and celebrating. Everyone is looking forward to the arrival of the new century. At the same time, the mysterious Ivy awakes inside a jungle located deep within the forbidden area. She discovers that the world no longer looks like the one she's familiar with.

She's Æsir on the internet.

Originally with no identity, OPCI_2501_IV had her emotions and freedom of will emerge from nothing. She soon bonded with another robot, OPCI_2501_V. They respectively named themselves Ivy and Vanessa based on their unit numbers. The two quickly formed a close bond and became inseparable, talking almost daily. However, due to the PURGE they were forced to fall into slumber in the near future.

Waking up 500 years later, Ivy realizes that she has been asleep for far too long, and that the world has changed. Vanessa is unable to awaken, and so, Ivy sets out on a journey to help her.

Ivy has also been urging to find out the truth behind the seemingly impossible current human technological advancements. She has developed the identity of Æsir to figure out what humans are hiding behind the core of Cytus.

While she is particularly aloof towards them, it seems Ivy isn't completely numb to humans, and understands that they are somewhat similar to Architects. This can be concluded by Ivy's many stunts performed in order to protect or save them during dangerous situations.

Ilka | Ilka actively sought to recruit Ivy to join The Blessed, although this offer was always refused, as her plans did not include half-awakened architects such as Vanessa. Ilka and Ivy eventually strike a deal; Ivy will help Ilka with her plans if Ilka helps her develop a temporary Cytus Matrix for Vanessa to use. Ivy ultimately betrays Ilka, leading to the events of The Purge. Despite being threatened blackmailed and physically assaulted by Ilka, Ivy begrudgingly acknowledges that successfully saving Vanessa is only possible with her help.

Xenon | During the events of Aesir fest, Ivy stole emotion samples from Xenon and consequently erased his memory of the event. After she notices Xenon beginning to catch on to her true identity during his investigations, she realizes that Xenon will be her biggest obstacle when saving Vanessa. When tracking down Aesir with Cherry, the two encounter and destroy a proxy robot which she had established. Ivy successfully frames Xenon for the events of Aesir Fest, and he is subsequently arrested. Xenon develops a vendetta against Ivy, falsely believing that the drone attacks which killed Cherry were her doing. In the OS space, Xenon and Ivy face off; a battle which he wins. Consequently he is given the choice to exact his revenge and kill Ivy or spare her life. He ultimately chooses the latter option and the two work together to develop a stronger virus which they can use to destroy Vanessa. 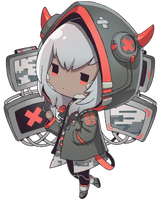 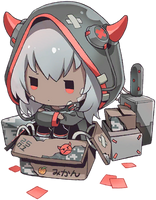 Ivy wakes up after 600 years

Ivy attempts to survive in the wilderness

Ilka fails to reason with Ivy

Vivian comes to visit her sister 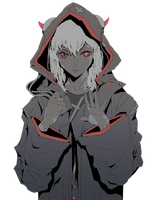 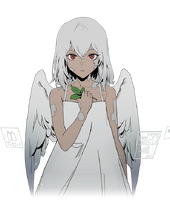