I've never thought that us meeting was merely a coincidence.

Bo Bo is a main character in Cytus II and is one of the 24 playable characters. He was released with the 3.4 update. Currently, Bo Bo has 18 songs, and maxes out at Lv. 50.

Notably, Bo Bo is not the girl depicted in the artwork (who is, instead, Rin), but is instead the animal flying next to her. However, Bo Bo's OS Logs do not focus on itself, but rather is uses as a plot device to explore the dynamics that Rin and Sagar have with the other members of Eagle-01, such as Alex, Bruno, Lucy, and later members of A.R.C. and a mysterious organization known as Light.

Bo Bo's story is instead told through some of Ivy's OS Logs. After finding it in a trap, Ivy attempts to hunt and eat it, but changes her mind and sets it free. Bo Bo is later found by Eagle-01, who saves it from its injuries and cages it. Ivy, mistaking them for poachers, attempts to set it free, but finds that they have bandaged its broken bones, and decides to flee upon the team seeing her. From there, Bo Bo is taken back to A.R.C. where it remains in the care of Rin.

Borlgidaans are extremely agile and very rare organisms which can only be found in the desolate forbidden areas. It is also noted that Borlgidaans are even more sensitive to human emotions than dogs and cats; this is evidenced in the story by his caring, inquisitive attitude towards others specifically Sagar and Rin. 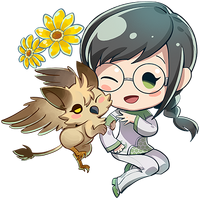 Sagar sees Rin longing for the outside world

Sagar stares down the Bionic Deer

Lester tells Sagar about his son

Sagar has a heart to heart with Rin

Sagar rides the bionic deer back to A.R.C.

Daisy is arrested for her crimes

Daisy being experimented on 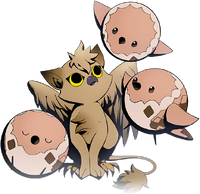