The night where a girl fell because of Gravity.

Aroma is a main character in Cytus II, and is one of the 23 playable characters. She was released with the 1.7 update. Currently, Aroma has 11 songs, and maxes out at Lv. 27.

A young girl who lost her memory due to a car accident. With support from her family, she was able to return to her path of becoming an idol once again. The young girl took over Node 08 by storm. Appearing on every electronic screen imaginable, big or small, she garnered thousands of devoted fans. People were mesmerized by her beautiful voice, and her amazing presence on-stage drew loud cheers wherever she goes.

Before the 7th Anniversary of her debut, the young girl received a mysterious letter: a performance invitation from the legendary DJ──Æsir…

Aroma provides backstory and extra details about Paff─from before her debut to the days leading up to PAFFCON.

Character relationships are intimately related to the games story. Read at your own risk. 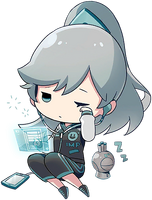 Aroma's BG in the "Bad Ending"