Alice is a collaboration character in Cytus II and is one of the 20 playable characters. She was released with the 3.4.5 update. Currently, Alice has 11 songs, and maxes out at Lv. 20.

An easter egg song ’Sairai‘ can be found by levelling up Alice to level 15 and opening OS log Cam_Lobby_Al23. 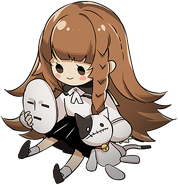 Add a photo to this gallery
Retrieved from "https://cytus.fandom.com/wiki/Alice?oldid=124728"
Community content is available under CC-BY-SA unless otherwise noted.